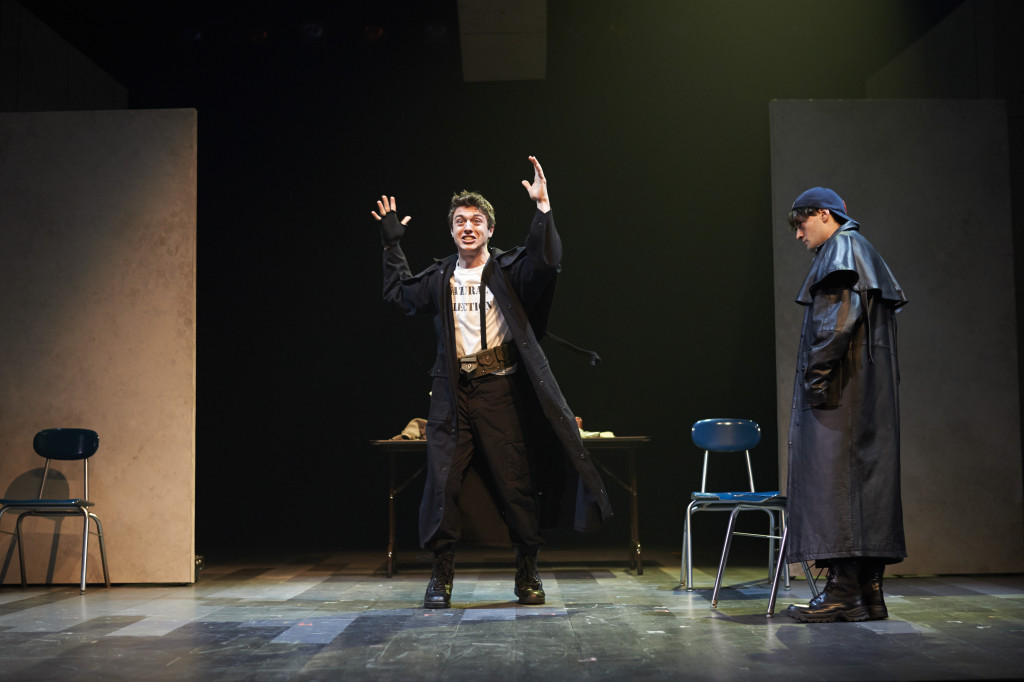 Evan Gambardella caught our eye in 2012 in Assassins but it was his columbinus that won our respect and admiration. His level of precision, execution, and commitment to his craft and his particular role as Eric Harris/Freak was astonishing and deeply rewarding. In his Interview, Evan discusses the audition and rehearsal process for columbinus, his research into the role, and even his extraordinary background and skills as a professional magician that has taken him all over the world! Click here for the full interview.

Evan, can you introduce yourself to our readers?  Who are you?  What is your performing history? And how did you start performing?

I’m unsure if there was one particular moment that started it all, but I have been performing and training since I was age 3 or 4. I went to a performing arts preschool, and, growing up, I took lots of classes in dance, visual art, theatre, writing, and music. I auditioned and performed in professional theatre and film throughout middle school, and I studied theatre at a half-day arts magnet high school in New Haven. Most recently, I graduated from the Boston University School of Theatre (SoT) in 2014 with a BFA in Acting. I’ve been incredibly lucky to have been afforded such fantastic opportunities.

Besides being an actor, I’m also a professional magician, balloon artist, and hypnotist. While I’ve been primarily based in the Northeast, I’ve taught and performed across Europe, Africa, and the continental United States.

Talk to us about your role in columbinus.  What was the audition and rehearsal process?

The audition was super relaxed. Just me and Clay (the director) in a room. I did a monologue from Annie Baker’s The Aliens.

The rehearsal process was truly extraordinary. I have never been a part of a show where everyone involved, from the actors to the stage crafters and design team, were so caring and passionate about telling a story. We all were so supportive of one another, and picked each other up when the heaviness of the material was getting us down. There was so much love and enthusiasm for the work we were creating together—I think it showed.

What kind of research did you do in preparation?

A lot. Everyone in the cast did extensive research on the people and events surrounding the shootings. Not only to inform character choices, but also for brain food. The details, while morbid, were gripping. We often suggested books and documentaries to each other, and were quick to send each other links to valuable online source material—there was so much info available to us. We also had Zachary Dyer on hand as our invaluable dramaturg; he answered our endless questions and bookmarked important information for us to read.

Harrison (Dylan Klebold/Loner) and I got together several times to watch a few documentaries, peruse source material, and videos of Eric and Dylan. We actually spent a day at a shooting range, which was a first for both of us—an experience I’ll never forget.

I did a lot of my own personal research. I created a playlist of Eric’s favorite, music which I listened to for several weeks, and to my surprise, started to like a lot towards the end. I also watched one particular video of Eric talking into a camera several dozen times. I’d watch it on repeat before I came into rehearsals for Act II.

What was easiest for me was connecting to Freak in Act I, before he becomes Eric in Act II. Yes, there were many differences, but much of Freak’s inner frustration and alienation felt quite familiar to my own high school experience. I felt like I had a comfortable amount of raw material to draw from and work with.

The Library scene into the suicide was the most difficult for me. I remember feeling this weight in my stomach every time we were about to do it. Holding a gun up to my friends was dreadful, as well as feeling this nauseous combination of wild rage, joy, power, and fear. The first time we ran through the scene in rehearsal it took a while for me to shake Eric out of my body. But during the run I had a routine that helped me unwind: Every time I went offstage after those scenes were over I ate a special dessert in my dressing room, and I took a shower during Act III to wash any residual Eric down the drain. 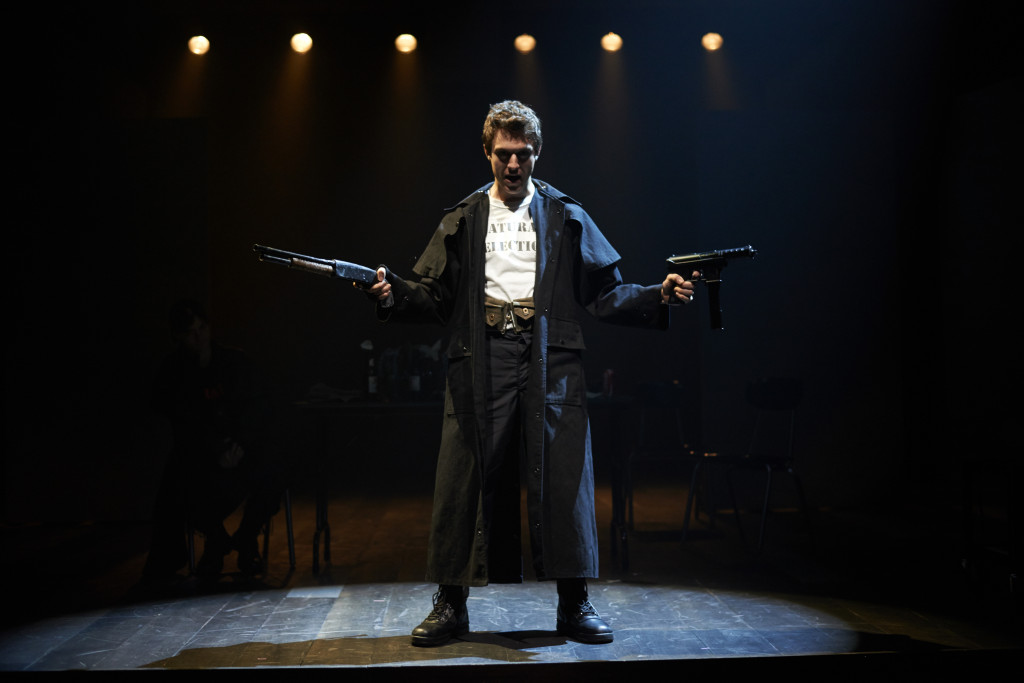 Of what production or project are you most proud?

columbinus. Without question. Not only was every aspect of the production incredibly specific, well-crafted, and handled with such care, but I could feel that everyone involved knew they were making a difference. I can’t tell you how rewarding it was to hear people leaving the theatre talking about the larger questions presented in the play, rather than: “I liked it” or “that actor was great.”

What are some of your role models and idols?  Why?

Some that come to mind right now: Mark Rylance. I saw Jerusalem three times in the front row. Also: Robin Williams (as a comedian and actor), and Danai Gurira (as a playwright and actress). That list is way longer, but I’ll keep it abridged for now.

Why do you think that columbinus was an important production for BU CFA to produce and perform?

This was the most important production I’ve ever been a part of. I think BU CFA already does, and will continue to do work that puts these difficult topics on stage. There have been countless mass shootings and attacks since Columbine; unfortunately, they show no signs of slowing down. columbinus is not preachy, and neither demonizes, nor glorifies Eric and Dylan. It’s so much more than just “that sad Columbine play.” It’s a question, or rather, a lot of questions; and none of them can be easily answered or answered at all! This play has so much heart, and I think audiences are hungry for it.

Any roles I get cast in! I don’t really have a bucket list. As long as I get to act, I’m golden.

What was the training program like at BU CFA?

The training was stellar. Lots of sweat, tears, and sleep deprivation, but it was well worth it. My acting improved, and continues to improve as a result. But more importantly, I became a better person. The training opened my heart, my mind, and my spirit in ways that I will forever be grateful for. It truly changed my life for the better.

Looking back I think I had a major breakthrough in almost every one of my classes; so I can’t say that one class was more beneficial than another. In hindsight, I often didn’t see how important a lesson was or fully understand it until many weeks or months later. Even a year out of school I’m beginning to understand my lessons in a whole new way, and I doubt the ‘eureka’ aftershocks will stop anytime soon.

As for advice for underclassmen: meditate. It was my saving grace after freshman year, and it helped me to see the important things.

What is the funniest thing to happen to you onstage or during an audition?

I’ll pick a columbinus story. Tech was taking a very long time, as usual, and we were stuck at the end of Act II. This is after the Library scene when Dylan and Eric commit suicide. There was a fast cut to black as soon as the guns went to our heads, and the timing needed to be perfect. Since we were doing the scene again and again, it was getting everyone in the room into a funk. Our final time through, rather than putting the guns to our heads just before the blackout, Harrison and I went in for a kiss. The room erupted with surprise and laughter! It was such a necessary release for everyone in the room, and one of my fondest tech memories.

Do you plan to work in the Boston area?  Why or why not?

Absolutely! Right now I’m calling myself an artistic nomad and just going and living wherever I get work. No set living situation yet. At the moment I’m staying outside of New Haven, but I’d love any excuse to get back to the Bean. The theatre scene is great, and it appears to be expanding in really exciting ways. The city leadership also seems to support a growing artistic atmosphere—which is fantastic. Personally, though, the biggest draw for me is the community. Boston has a lot of cool people.

Do you have any upcoming projects or productions?

There are a few projects in the works, but at the moment I’m working on Yale Rep’s world premiere of Elevada by Sheila Callaghan. We are running until May 16th!

Do you have anything else to share with our ArtsImpulse readers? 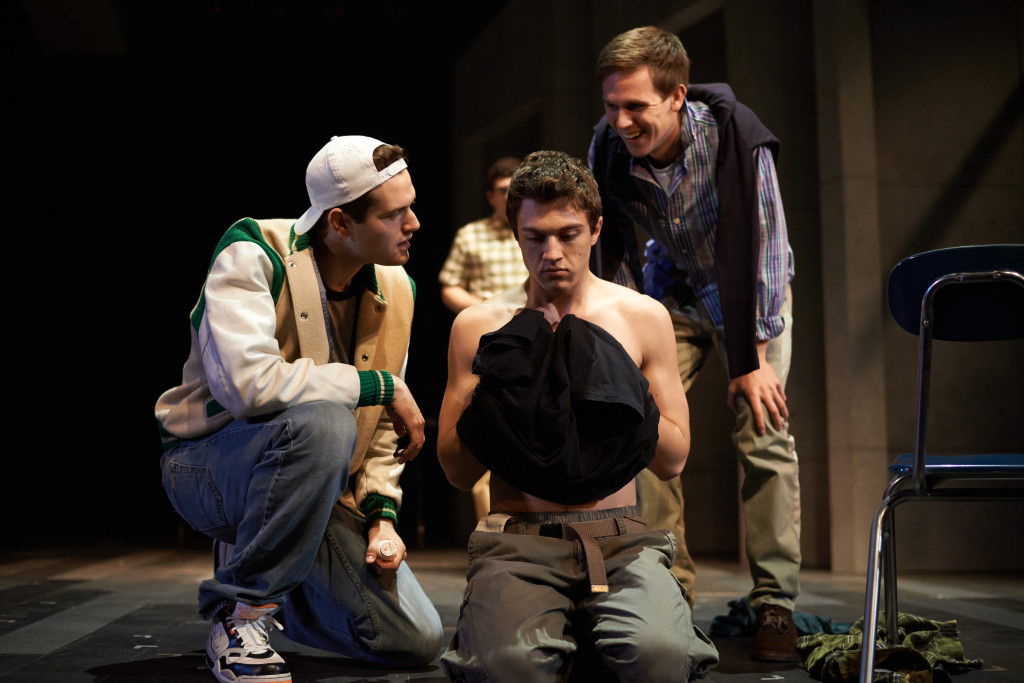