Connecticut born, Roman Catholic-raised, and magician slash balloon artist by trade. I’ve been a church-going, rubber-bending, prestidigitator since the ripe age of 4. Or I was, at least.

Some of my innocence was by choice, like with food. I ate a mere twelve foods, down to the specific brand name, right up until I decided to get onto a plane. Pasta (Pastina, Ziti, and Penne only)

Chocolate Chips (only the mini ones until age 12, placed delicately on pancakes, waffles, and sometimes peanut butter sandwiches  to spice it up a little)

Waffles (Eggo or Belgium waffles from a diner)

Butter (For the pasta, pancakes, and waffles)

Beef Patties (usually from McDonald’s and cooked well-done anywhere else; God forbid if the cook put condiments on it. I’d sooner go hungry than eat a patty contaminated with a pickle or mustard)

Hot Dogs (Hebrew national or Hummel’s only, without a bun, diced up, and dipped in ketchup)

For breakfast I’d alternate between chocolate chip pancakes, or chocolate chip waffles with butter. I’d never eat them with Maple syrup. For lunch and dinner I almost always had peanut butter sandwiches, no jelly, Utz potato chips, and a glass of Garelick Farms Skim Milk. Sometimes I’d indulge and have a hamburger or a hot dog, but I usually just had a peanut butter sandwich again.

Beyond the chocolate, ketchup, and peanut butter, exciting flavors were an anomaly to me. If “we are what we eat” is true, I was living a particularly bland and boring existence.

My parents don’t know how I got so picky. Apparently as a little kid I was afraid of eating seeds, or anything natural really, because I feared it would sprout in my gut, explode out from my stomach and through my skin like that scene from “Alien,” feed off of my remains for all of eternity, and I’d somehow be alive long enough to witness it, and cry and scream and God would look on and laugh and be like, “YOU DESERVE IT EVAN YOU ATE SEEDS!” Despite eventually learning seeds would not kill me, I still refused to try anything new as a teenager. Any foods beyond my Dull Dozen were no different than poison dart frogs: the brighter and more colorful the food, the more my subconscious considered it lethal. It was as if my entire identity depended on never trying anything new.

While kids ate pizza and soda at birthday parties, I ate a peanut butter sandwich and drank water. While my friends ate candy at Halloween, I’d just collect it and keep it tucked away in a big jar until I emptied it out a year later for the next trick-or-treat harvest. While my family enjoyed the full buffet of Thanksgiving eats, they looked on as I refused to eat nothing but bread rolls and butter.

Once I got older I couldn’t hide behind the “he’s just a kid” excuse as a picky eater. So I began to make up allergies I didn’t have. People were quick to judge my picky eating, but they wouldn’t dare question an allergy. I told people I was allergic to whatever was on the menu: “There’s some chemical they put in it that makes me break out with hives,” I’d say during high school field trips and parties.

My diet became my identity, and I was oddly proud to have never tried chicken, eggs, cheese, seafood, fruits, and vegetables.

My pickiness wasn’t reserved to just food either. Musically I only listened to classical, neoclassical (movie soundtracks), and jazz. Rock and roll was too cool for me. Pop was too mainstream. Hip Hop had swears in it, which was a no-no in my household growing up.

When I went to my high school prom I literally couldn’t sing along to anything the DJ played. I took pride in not knowing, though. It gave me some weird sense of purpose, as if I knew something everyone else was missing out on. Ironically it was the other way around. Talking about sex with my parents was never really on the table. They tried to have ‘the talk’ a couple times with me when I was younger, always unfinished. As soon as I imagined having to put my penis in someone’s vagina I screamed and ran away as if I were Kevin McCallister in “Home Alone.”

Once I went to college I tried to talk to my parents about it again. I remember sitting in the car with my Dad and driving back to Boston:

My public high school had a sex-ed program, but I was taken out of it most of the time. Why? Because I was bullied badly from the age of 9, as most short, glasses-wearing, big-toothed kids are; I had braces three times before my bucky-beavers finally got in line with the rest of my teeth. Since guidance counseling wasn’t specifically engineered in my school schedule I had to be taken out of sex-ed classes to deal with the bully problems. I didn’t mind though. Talking about anything sexual made me feel horribly anxious and uncomfortable. I was glad to have an excuse to get away. Al, known as the ‘White Rhino,’ was a charismatic theater critic who took a liking to me after seeing one of my performances in college. He was older, around 65, very smart, ex-pastor, short white receding hair, big boned, thrice my size, and beady-eyed. Al had the incredible talent of being able to make anyone feel important and needed. He had a knack for sniffing out young people who lacked self-confidence searching for mentorship. I was no exception.

He showed me new music, talked about religion as I distanced myself from the church, and got me to talk about all sorts of things I’d never discussed with anyone else before.

In regards to sex talks, it was much more difficult for me to run away from a mentor than from my parents. I knew I had to talk about it. I was too behind on my sexual development. While my college buddies were talking about having sex for the first time, I was still a cheese-virgin and only touched myself when I peed.

Hearing an old man talk about touching himself and going “raw” is usually difficult for most people. I was skeeved out by it too. But I thought it was just me. I assumed I was uncomfortable because of my sexual inexperience, not because Al was being a bit of a creep.

I felt badly judging him so harshly in my mind though. He was always so nice to me. He frequently took me to trending movies, expensive plays, and fancy dinners. I even tried steak for the first time with him.

My mom was ecstatic when she heard I expanded my Dull Dozen to a Thrilling Thirteen. She let me know it too. As a an elementary special education teacher Mom was never one to hold back what was on her mind. She was always the first to loudly point out a zit on my face, or anyone else’s for that matter.

Mom first met my mentor in New York City during one a run of one of my plays. She hugged Al upon meeting him, smiled, and loudly pronounced, “you look just like a pedophile!” Al’s trench coat, affable leer, and my mother’s loudmouthed intuition should’ve been a dead giveaway at the time. We were too smitten with his ability to cajole me into trying new foods. “Fear is fun in disguise,” Al often reminded me. He took it upon himself to help me break out of my shell and experience new things I was all too often scared to do on my own. He wasn’t wrong.

I used to be terrified of roller coasters before I finally rode one for the first time; once I finally went upside-down at Busch Gardens at age 18, I became obsessed. I used to be a germaphobe, wearing only long-sleeve shirts to use as makeshift gloves while opening doorknobs, keeping my skin from directly touching anything. I would even wear them while swimming in heavily chlorinated public pools. But once I took my shirt off to swim in a pool for the first time as a young adult, it liberated me. I was so proud of myself that day. I’ll never forget it.

Overcoming scary things were often recalled as my most exciting memories. They gave me meaning and pride. When I began trying new things I realized just how much I was missing out on. Pizza became my favorite food. The Beatles were suddenly Shakespearian. I became enamored with the abundance of new flavors, textures, rhythms, and lyrics to consume.

So anytime Al touched me awkwardly or held me a bit too tightly, I dismissed my subconscious red flags as uninformed insecurities. How could I possibly trust my intuition when my entire diet, musical taste, and sex life had suddenly come into question?

I needed to be afraid. Until I overcame my fears, I couldn’t experience all that life had to offer. I knew I needed to trust others smarter and more experienced than me. So that’s what I did. I listened, opened myself up for change, and made balloon sculptures along the way. 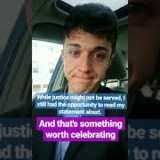 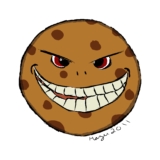 About a week before leaving the USA, I found an incredible f ... 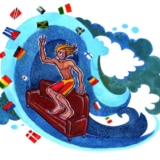 Months before I took off my clothes in Athens, some well-tra ... 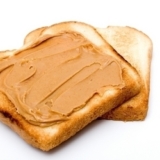 My journey began on a rainy evening in Athens, Greece, mere ...